Diabetes – Leading Cause of Blindness for Americans

Diabetes is the leading cause of blindness for Americans.

According to the American Academy of Ophthalmology, 2,500 Americans become blind from complications of diabetes. About half of the nation’s estimated 16 million people show at least some signs of early diabetic retinopathy.

Early symptoms of diabetes can often go undetected and vision may not be affected until the disease is more severe and even harder to treat. Some symptoms that are usually quick to detect include: 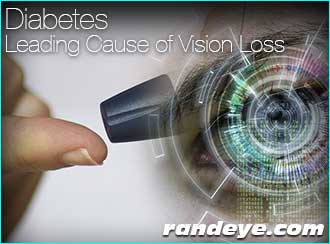 A group of eye problems can arise due to diabetes. Cataracts and glaucoma are only a couple of vision stealing side effects. If you have diabetes you may get cataracts at a younger age, and your chances of developing glaucoma doubles.

Although many people with diabetic retinopathy do not ever progress to the most serious form of the disease, frequent testing will help your doctor monitor the patient’s condition closely.

Since most people do not develop any visual impairment until the disease has progressed considerably, delaying an eye exam until symptoms occur can result in permanent loss of vision.