BY POPULAR DEMAND!! Our LASEK discount continues for a few more weeks. Call for your complimentary consultation. 954-782-1700. LOVE YOUR VISION ❤️ 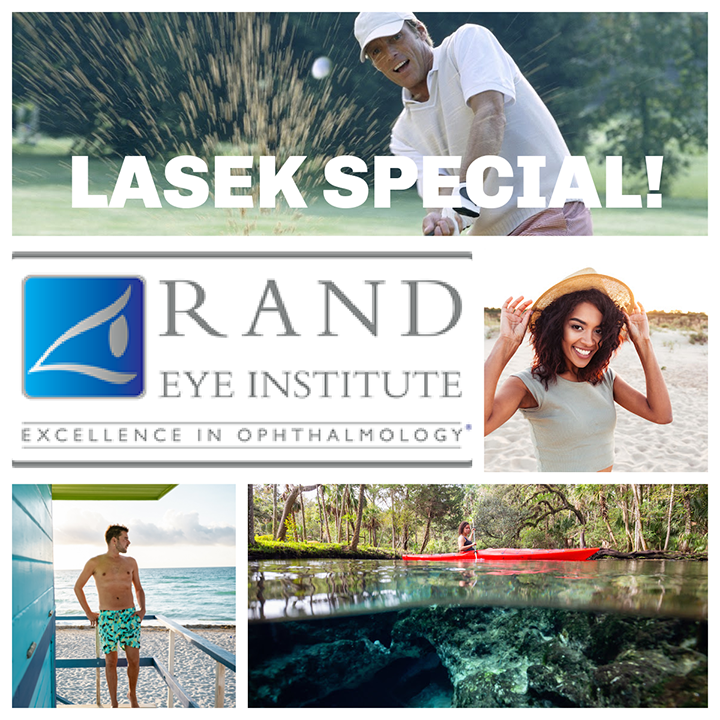 Laser In Situ Keratomileusis (LASIK) has long been one of the most effective and innovative vision care treatments available. Although LASIK has been around in some form since the 1960′s, the procedure has been improved decade by decade and has emerged as one of the most popular methods of helping patients establish clearer vision with less reliance on eyeglasses or contact lenses. Current incarnations of LASIK are designed to utilize both conventional treatment and laser surgery to correct vision affected by nearsightedness, farsightedness, and astigmatism.

The advanced surface procedure does not require the creation of a corneal flap. Instead, the superficial (epithelial) layer of the cornea is simply brushed aside and the excimer laser is applied to the surface to reshape the corneal tissue. This epithelial tissue usually regrows to cover the surface within a few days.

The biggest advantage of no-flap laser vision correction is the elimination of most of the flap-related risks. Most conventional LASIK is usually a safe and complication-free experience, but there are certain risks associated with a corneal flap. Chronic dryness, distorted vision from flap misplacement and early and late complications due to the structural weakness related to the corneal flap. With no-flap laser vision correction, these risks are virtually eliminated.

No-flap laser vision correction is a great option for many patients who do not qualify for conventional LASIK because they have thin corneas, or have had previous LASIK. For this reason, the military forces approved surface laser procedures a number of years ago.

The Rand Eye Institute has earned an international reputation as one of the largest and most advanced eye surgical centers in the world. Having helped thousands of people preserve, regain and enhance their eyesight, we provide laser vision correction and refractive procedures the best way possible:

There are several ways to access and reshape the corneal tissue without creating a flap. Each no-flap procedure generally involves the following steps:

You deserve your best possible vision.

Verification of a facility’s licensure and accreditation is an important step in helping to assure an excellent outcome. Before having Laser Vision Correction done anywhere, we recommend verifying with the surgeon that:

* The Agency for Health Care Administration is the licensing agency for surgical centers in the State of Florida. To verify a center’s licensure, contact AHCA at 1-850-487-2717 or visit www.fdhc.state.fl.us.

Am I a good candidate?

The decision to having laser vision correction depends on the results of a thorough preoperative evaluation. Just as you are a unique individual, each eye requires unique and careful examination with the best technology. At the Rand Eye Institute’s technology Department, we perform a comprehensive testing evaluation to determine whether or not you are a safe candidate for laser vision correction. It is important to understand that not everyone is a suitable candidate for Laser Vision Correction. Some basic requirements include:

What kind of results should I expect?

Everyone is different. Most patients no longer need glasses or contacts while driving, playing sports or watching movies and television, or have greatly reduced their dependence on them. People pursuing careers that require excellent vision—such as police officers, paramedics, physicians, military forces and athletes—have benefited greatly from Laser Vision Correction. Even those who are severely nearsighted, astigmatic and farsighted can achieve outstanding results with Rand Eye Institute’s vision correction procedures.

The Rand Eye Institute has earned an international reputation as one of the most advanced eye surgery centers in the world. People have traveled from as far away as Canada, Israel, France, England, Germany, Bangladesh and virtually every country in South America and the Caribbean for surgery at the Rand Eye Institute. Our list continues to grow.

If you would like to see if you are a candidate for laser vision correction, please contact the Rand Eye Institute today.

Call us at (800) 782-1711 or request an appointment online here. One of our surgical coordinators will contact you within the next business day.

One major innovation in cataract surgery is the Rand-Stein Analgesia Protocol (as published in the May 2000 issue of Ophthalmology). Developed at the Rand Eye Institute, the Rand-Stein Analgesia Protocol eliminates the need for local anesthetic injections and reduces the risk of damage that these injections could cause to the eye. All medications used in the protocol are FDA-approved. This represents an important advancement in cataract surgery, which has been studied by thousands of eye surgeons worldwide.

The Rand Surgical Pavillion, located on the first floor of the Rand Eye Institute, is a state-of-the-art surgical center that is inspected and licensed by the State of Florida Agency for Health Care Administration (AHCA) and regulated by agencies of the State and Federal government. The Joint Commission, the nation’s oldest and largest healthcare accrediting agency, also accredits the Rand Surgical Pavillion.

A Tradition of Excellence

The Rand Eye Institute has a history of accomplishment spanning more than three decades. We maintain an ongoing tradition of excellence and a firm commitment to quality care and quality caring.

All surgical procedures and medical devices have risks. At the Rand Eye Institute, the risks and benefits of surgical procedures and medical devices are discussed in detail prior to scheduling for surgery. A comprehensive discussion with your surgeon will enable you to make an informed decision. We screen all patients prior to all surgeries and do extensive pre-surgical testing to eliminate from consideration those who may not be a suitable candidate for a procedure. It is the goal of our organization to safely obtain the best results for those who are appropriate candidates for a given procedure.

To learn more about possible risks and complications