Diabetes is a disease caused by high blood sugar levels that occur when the pancreas does not secrete enough insulin or the body is unable to process insulin properly. Insulin is the hormone that regulates the level of sugar (glucose) in the blood. Diabetes can affect children and adults

How does diabetes affect the retina?

Over time, diabetes affects the circulatory system of the retina. The earliest phase of the disease is known as background diabetic retinopathy. In this phase, the arteries in the retina become weakened and leak, forming small, dot-like hemorrhages. If the disease progresses, leaking vessels can lead to swelling (edema) in the retina and decreased vision. 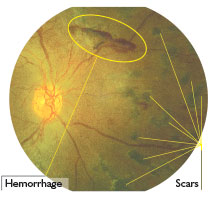 The next stage is known as proliferative diabetic retinopathy. In this stage, poor circulation causes the retina to become oxygen-deprived (ischemic). New fragile vessels grow as the circulatory system attempts to maintain adequate oxygen levels within the retina. This is called neovascularization. Unfortunately, these delicate vessels bleed and leak. Blood may leak into the retina and vitreous, causing blind spots and decreased vision.

In the later phases of the disease, continued abnormal vessel growth and the development of scar tissue may cause serious problems such as retinal detachment or glaucoma.

Floaters and flashes of light

Diabetic patients require regular eye examinations so related eye problems can be detected and treated early. Diabetic patients need to be under the close observation of an internist or an endocrinologist as well as by an ophthalmologist.

Diabetic retinopathy is treated depending on the stage of the disease and the specific problem that requires attention. The ophthalmologist may rely on several special tests to monitor the progression of the disease and to make decisions for the appropriate treatment. These tests include: fluorescein angiography, retinal photography, macular OCT testing and ultrasound imaging of the eye.

With PRP, the ophthalmologist applies laser to reduce the amount of oxygen-deprived retinal tissue outside of the patient’s central vision. While this may affect the peripheral vision, PRP can prevent the continued growth of the fragile vessels and seal the leaking ones, thereby preserving vision. The goal of the treatment is to slow or stop the progression of the deterioration of vision.

Vitrectomy surgery may be needed for diabetic patients who suffer a vitreous hemorrhage (bleeding in the gel-like substance that fills the center of the eye). During a vitrectomy, the surgeon carefully removes blood and vitreous from the eye and replaces it with a clear natural-like solution. At the same time, the surgeon may also gently remove strands of vitreous attached to the retina that could lead to retinal detachment or tears.

Patients with diabetes are at greater risk of developing retinal tears and detachment. Retinal tears are often sealed with laser surgery. Retinal detachment requires surgical treatment to reattach the retina to the back of the eye. The prognosis for visual recovery is dependent on the severity of the detachment.

Researchers have found that diabetic patients who are able to maintain “normal” blood sugar levels more often, have fewer eye problems than those who have poor control. Diet and exercise play important roles in the overall health of those with diabetes.

Diabetics can also greatly reduce the possibilities of eye complications by scheduling regular examinations with an ophthalmologist. Problems can be treated with much greater success when caught early.

Hope for the future

Dr. Rand is Chairman of the Florida Board of the Diabetes Research Institute (DRI) Foundation and serves as the Vice-Chair of the national board. The sole mission of the DRIF is to support the Diabetes Research Institute at the University of Miami Leonard M. Miller School of Medicine, a recognized world leader in diabetes research and the best hope for a cure for diabetes.

More than 18 million children and adults in this country alone are affected by diabetes. DRI scientists are making tremendous progress toward a cure, however, until we reach our ultimate goal, it is important for patients to practice excellent diabetes management to maintain optimal health.

Rand Eye Institute’s Vitreo-Retinal Department offers comprehensive medical and surgical management for vitreo-retinal diseases with the most advanced technology. Close collaboration with the other Rand Eye Institute departments assures that patients will receive timely and personalized retinal as well as comprehensive ophthalmology services. It is important to understand that diseases of the retina can affect any and all ages. Initial symptoms should not be overlooked and an immediate consultation with a vitreo-retinal specialist can make all the difference.